This is a little late, but we've been busy around my household. Here is the Christmas tree as it looked Christmas morning before Quincy tore into anything under it: 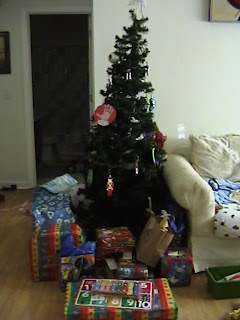 It looks pretty much the same today without the pretty paper.:) We're lazy people around here. Okay, I am a lazy person. I will eventually remove all my gifts from under the tree and relocate them to somewhere in the bedroom, where they'll sit until February. My husband will tell me to put them away and I will, maybe. Happens every year.

By the way, my husband had all his stuff put away by Christmas night..

I don't know about every one else's Christmas, but this one was exciting since Quincy is 4. He finally seemed to get it. Santa Claus. Presents. The whole bit. Maybe a little too well. When he was finished opening all his gifts, he said, "Aren't there more for me? I want more!" He really should have been happy that he even got gifts. He opened almost everything under the tree December 22. There were only 8 gifts and he opened 7. Most of those were for my husband so he wasn't very surprised Christmas Day. I got to rewrap everything (like that's a privilege. It resulted in a major backache.)

It's almost New Year's Eve. I will celebrate with my annual tradition of falling asleep by 11 while watching TV with my 4 year old. :)
Posted by susan at 9:25 AM No comments:

Does It All Equal Out?

Just read a post over at Girl's Gone Child , "Pictures of the Gone World" and it reminded me of several things that have been on my mind lately. The post that is linked to in it over at Dad Gone Mad made me think even more.

I met my husband at work, in a world totally removed from who he was socially or, in some respects, as a person, at least to the extent that a uniform erases personalities. I got to know him while we dated and he was a great person for me to date. A great person for the grad school student that I was to hang out with. I always worked from 4:00 p.m. until around 10:00 p.m. so my schedule pretty much consisted of getting up around noon and going to bed around 2 a.m. That meshed well with who he was and is--a person who pretty much always stays up until at least 4 a.m. and would sleep until 2 if left alone.

From the beginning, there were obvious differences. His friends went to lots of music shows and festivals, drank, and stayed out until the sun came up on a regular basis. Mine hung out in coffeehouses, reading Proust, and discussing Postmodernism. A lot of his friends were intellectuals who just happened to enjoy live music. Where am I going with this?

4 years later, his friends are exactly the same. Some have full-time jobs. Some simply work enough to earn the money to go out. My friends are all working at some sort of full-time job. One is working in the music industry in Nashville; many are teachers in various locations around the country. None of those routinely stay out all night. Few of them have children.

When we had our son, I was the one who gave up staying out all night. I was never much of a partier anyway. I don't drink or smoke so I always sat back and observed. 4 years later, my husband still stays up until 4 a.m. even when he has to get up early the next day to be responsible and watch our child. He still goes to shows and comes home as the sun is coming up. At 29, he reminds me of myself at 19. I wonder when it all equals out or if it ever does?
Posted by susan at 11:15 PM 2 comments:

I've had this picture uploaded on my computer for a week, but then Monday happened and there was a dentist's appointment and work. Tuesday was the pinkeye day and another doctor's appointment. Wednesday, we tried to Christmas shop. Anyway, here's the pic: 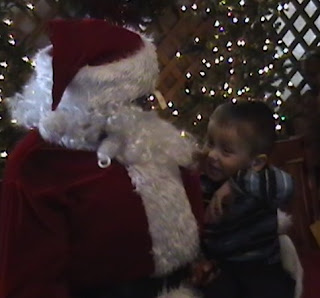 In case you can't tell, Quincy loved Santa this year. He told him all about what he wanted for Christmas and about the train that they had nearby. And there was no crying or screaming. It was awesome!

However, I can't help but think about the fact that pinkeye has a 3 day incubation period and this picture was taken Saturday. Quincy came down with it on Tuesday. You see my line of thought? Of course, he probably got it from me.:)

Okay, now back to cross stitching, laundry, and making buckeyes!
Posted by susan at 12:18 PM No comments:

I got up this morning at 5:15 with my eyes still goopy from the pinkeye I've had for almost a week and switched on the TV. It was supposed to reach freezing sometime around midnight last night and then the rain would switch to freezing rain. Apparently, the weatherman was right.

Schools delayed two hours, said the TV. I called my mom, told her the news, reset the alarm for a one hour later wake up time, and crawled back under the covers. It was still warm. I love my flannel sheets!

8:30. The alarm goes off. I go to wake Quincy for school and he will. not. wake. up. He finally moved after ten minutes and rubbed an eye. Guess what he came down with? Pinkeye!

So, no school for him, no subbing for me. Off we went to the pediatrician's and then to the pharmacy. Drops for him.

It's okay. It's actually a good day to be inside. It's still 37 and raining outdoors.
Posted by susan at 2:10 PM 2 comments:

Now that I am teaching the same class every day, what I teach tends to change often. Of course, I am still certified in English and would prefer to sub in that. It isn't always possible though. English teachers just don't seem to get sick all that often or people snatch up the jobs before me. That happens a lot. So many people don't care about where or for who they sub, just that they do. I often check to see what subject or grade level the teacher teaches.

In the past week, I have taught Spectrum, Middle School Geography, and Kindergarten. I always thought that the Spectrum kids would be like high school Honors students--more interested in what they were learning, more enthusiastic, better behaved. That's not necessarily true. They were interested, but I also had to try hard to keep them on task. The Geography was something I was kind of thinking would involve the students mostly reading. It did, except they really weren't getting it by just reading it. I didn't figure that out until the end of the day though. By the last class, I was giving a mini-lecture before they read the material. I thought that the Kindergartners might be easy. I really thought that after the teacher told me that I just had to do coloring, nap time, a DVD, and get them to their buses on time. They were the hardest of all and I was only there 2 and a half hours. It was crazy. Oh, and they kept hugging me, which was sweet until I heard about the vicious stomach virus that had been sweeping the school. I was especially not too thrilled when one little girl told me, "I feel like I might throwed up." She didn't, but still. I could never teach Kindergarten full-time.

I picked up a great case of pinkeye from somewhere this week. I assume it was Quincy's preschool, but who knows. I am not sure what the incubation period is on pinkeye. I just know that it started Wednesday night in one eye and then I woke up this morning with it in the other one, too. Today was a snow day. That was a sucky way to start it.
Posted by susan at 9:43 PM No comments:

Driving home tonight, we passed some apartments. Now, we always pass these same apartments, but I normally just say they are buildings that a lot of people live in. Tonight, I said, "Look at those apartments!"

Quincy said, "Do those apartments have stairses?"

Quincy said, "Do those apartments have a doorman?"

Then he said, "Do those apartments have a dachshund?"

We watch way too much Curious George.
Posted by susan at 11:05 PM No comments:

I spent the morning agonizing over whether or not I wanted to pursue the only two Language Arts positions open in my county. Once I decided that, yes, I should try, then I had to call the schools because the job postings clearly said, "Call school for interview." Usually, that means that someone will call you back with an interview time or even give you one right then and there. I hate calling schools. Even the secretaries make me nervous. Also, the remote possibility that I might speak to a principal practically makes me shake like a leaf.

Well, I took a deep breathe and I called. Both of them said to email or fax my resume. So much for worrying about who I would talk to on the phone. Emailing a resume means I need a cover letter of some sort because you can't just email an attachment with a blank message, you know? That would be unprofessional. So I wrote a great cover letter, highlighting my familiarity with teaching writing, and sent it. I cut and pasted the same letter, with a few tweaks, to the second principal.

Now I kind of hope they don't call. Principals make me nervous, which makes me seem unprofessional at interviews I think. I mean, it's bad when you are visibly shaken by the interview, right? I lose my train of thought. I forget all that I know. In one interview, I forgot what Student Performance Indicators are. In my last interview, I kept my mouth shut, for the most part, and I got the job. I read somewhere that you shouldn't talk too much in interviews. You might reveal something that they didn't ask you and that they see as a negative.

I really kind of hope no one calls me this afternoon.
Posted by susan at 11:32 AM No comments: 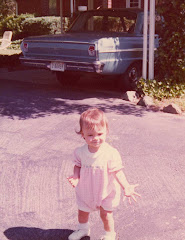 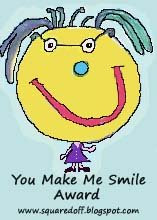